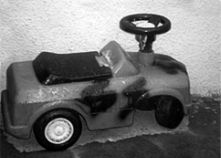 It’s not the war per se, but the violence it inevitably brings wit it – think of the Stanford Prison Experiment, remember Liran Ron Furer’s „Checkpoint Syndrome“ for just two chilling accounts of the effects violence on „white sheep“. And if some sheep are already black in disguise, war certainly attracts them, as it, at least partly, legalizes behaviour that is considered criminal in peacetime.

and I’m having trouble with my computer. So I won’t be exactly long winded for a change ;-).

There are many reasons for people to pursue a particular lifestyle or live in a particular culture. Some do it by choice [disregarding for practical reasons that any discussion about „choice“ will sooner or later approach the „free will“ dilemma], others less so – if for genetic or societal or whichever reasons. And in many instances there is no clear-cut criterion for a moral ranking of any of these lifestyles or cultures – they are incommensurable.

I have been confronted with this thought twice tonight. For the first time while I have been reading a recommendable essay by the University of Chicago’s Richard A. Shweder. It is called „Moral Maps, ‚First World‘ Conceits and the New Evangelists“ and deals with some problems relating to the seemingly eternal moral rivalry of „cultural relativism“ and „moral universalism“.

Richard A. Shweder is an anthropologist, but as he states himself in the essay, that doesn’t actually say a lot about a person’s belief system (anymore). I very much enjoyed reading this essay although I do not agree with his final conclusion that the world’s cultures will not converge economically if cultural conversion to western values should indeed be a condition for this to happen. But read and decide for yourself.

„The Southern Baptist Convention announced a new initiative Tuesday to convince gays that they can become heterosexual if they accept Jesus Christ as their savior and reject their ’sinful, destructive lifestyle.'“

I might disagree with Mr Shweder with respect to the question of cultures choosing less productive economic models over more productive ones in order to preserve socialised identities in the very long run (in my opinion, the real question here is, how exactly does de- and re-institutionalisation of cultural elements and their importance for individual identities work in reality – a question to which the Iraki „adventure“ will probably add some observations) but I doubt the Southern Baptists will be particularly successful on their latest mission…

OK, now that was a bit longer than I thought it would be.

Amnesty International Report 2003 The situation of human rights in 151 countries in the year 2002. This is what they say about Germany, France, the UK, the USA, and – for the last year of Saddam Hussein’s reign – Iraq. May I just say that I am happy to live in a country where a prison guard punching a prisoner is a sufficiently grave infringement of human rights to be reported by AI.

Of course, I don’t know why they are doing this. However, while I am holding up the individual „in dubio pro reo“, I assume a certain, not too small percentage of these people was actually looking for pictures or moving images of war crimes, whether real or not. I have to say I am not too unhappy to disappoint them.

But to those of my additional visitors with a different motive for their reseach effort and the ability to read German, I recommend the Swiss blog „Mono-Log“ for some rather interesting insights into the role of temple prostitution in ancient Babylon and the biblical „whore Babylon“ [in German].

I just received the most disgusting spam mail I ever saw. It read

„Iraqi Whores. People attacked in their homes and savagely raped at gunpoint. Footage smuggled out of Iraq by the troops who did it. Sexually deviant soldiers run wild. CNN would not play that footage.“

In all likelihood, this never happened. CNN would not play the tape, but they would certainly grill anyone who tried to cover that up. Certainly this is an advantage of embedding journalists with military units. If there had been embedded journalists in Eastern Europe in 1945, the Red Army’s soldiers would in all likelihood not have gang-raped two million women.

So if people invest money to shoot a film in which actors disguised as soldiers rape actresses disguised as Iraqi civilians there must be a) demand for this kind of material and they must b) have decided that the dollars they will earn are sufficient to bribe their conscience.

I am all for capitalism. And I have no ideological problems with pornography. But this is just disgusting.

when suppoedly indecent material cannot even be sold at first place. Today, the NYTimes reports that Wal-Mart is banning 3 men’s magazines (Maxim, FHM, and Stuff, of which I have never heard) because of the allegedly offensive nature of their cover designs.

According to the NYTimes

„[t]he decision to stop selling the so-called lads‘ magazines is the latest in a series of moves by the company to limit distribution of entertainment products it judges too racy for its shoppers.The company has refused to sell CD’s that carry warning labels about explicit lyrics; instead, Wal-Mart Stores sell sanitized versions of albums.“

Of course, Wal*Mart Stores, Inc., is a private entity and therefore, technically, no legal constitutional issues are at stake in instances like these. But that does not make things easier at all, as Nadine Strossen, a professor of constitutional law at New York Law School and the president of the American Civil Liberties Union explaines to the NYTimes –

„[w]hen you have a store that in many parts of the country has a dominant position, so that if you can’t buy a magazine at Wal-Mart, you can’t buy it at all … [i]t has literally the same practical effect in many communities as outright government censorship.“

If that were indeed the case, then the sheer market power of retail gatekeepers like Wal*Mart may make it necessary to rebalance their – and their shareholders‘ – discretion with respect to other people’s ability to exercise their rights –

„[t]he Timothy Plan, a mutual funds management firm that invests in companies based in part on whether the companies share its values, has been pressing Wal-Mart to pull women’s magazines like Cosmopolitan and Glamour from checkout lanes and put them back into the magazine rack. Arthur Ally, president of the Timothy Plan, said that he saw magazines like Maxim and FHM as ‚a level worse. It is soft-core pornography,‘ he said. ‚It’s very addictive and leads to harder stuff.'“

Speech can only be free if it can be heard. And „censorship“, legal and/or de-facto always starts by prohibiting something not too many people won’t object to. The shifting of acceptance boundaries is what makes this process so dangerous.

But Wal-Mart’s decision may not prove to become a cultural disaster. Maybe, their decision will even foster digital literacy in those regions where the retailler does indeed possess the power to prevent people from buying the magazine of their choice.

For in the internet, there will always be a free shelf.