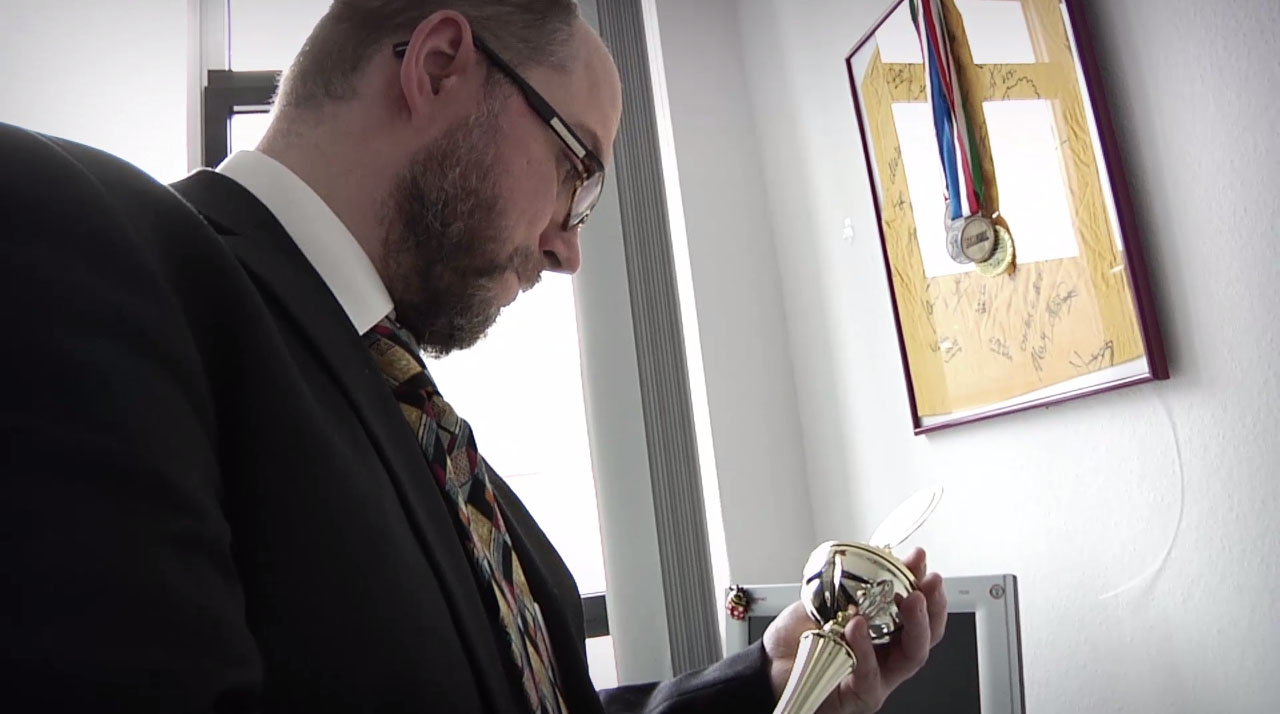 According to the Guardian, a British recruitment firm got into a bit of trouble with the UK’s advertising watchdog because one of its radio ads features an apparently German boss whose spoken German is well, slightly, reminiscent of Charlie Chaplin’s impersonation of Tomenia’s Great Dictator. The ad didn’t go down too well with the Advertising Standards Authority, which eventually pulled it because the humour was „derived from a stereotype at the expense of German people.“

Check out the Guardian’s Mark Sweney’s report on the matter ad listen to the ad yourself – Radio ad banned for implying Germans are ‚tyrants‘.

Not that I disagree with the authorities assessment of the use of such a badly sketched stereotype in the ad in theory – but given the cultural importance of Hitler impersonations for the English identity, and assuming  that, by now, most Brits will likely be aware that Hitler is not really the current Chancellor of Germany, I can’t help but wonder to which extent those who came up with the spot, and those who are listening to it, are actually connecting real Germans to such a bad rendition of Chaplin. I doubt that a lot of them were actually thinking, as the authority suggests, „… that German people were more likely to be unreasonable or aggressive to others…“ They aren’t – except when it comes to penalties, of course.

But be that as it may, this incident is, of course, really as good a reason as any to link to this compilation of the best moments from Chaplin’s „The Great Dictator“  – enjoy.

Update 2 – Thomas Vehmeier explains on the Internet Economics blog (in German) why „think global, act local“ isn’t just a good slogan for environmentalists. When it comes to Social Media Marketing, it should be the guiding principle from the outset – one would think that flickr’s problems in this context would not have gone unnoticed. Yet he mentions that facebook doesn’t even seem to have a phone in Germany. Still, he shares my opinion that facebook is the most interesting social networking tool out there.

Update – It seems the campaign has been cancelled (see, eg, Frank Helmschrott’s blog (in German)). Currently, I can no longer see the ad when googling for my name. But –

You may try for yourself. I’m not sure about the legal situation in this case, after all, there are a couple of other people who legitimately respond to my name. Carsten Ulbricht has a quick legal analysis regarding the question of the applicable privacy legislation on his blog (edit: in German). His suggestion, that German law is applicable in this case since German and European privacy regulations cannot be waived by accepting the facebook terms of services may be correct. It still begs the question if facebook has actually used member names (and then possibly violated privacy regulations) or simply combinations of first and last names, possibly „inspired“ by the actual names in its database.

But still, it’s feels dodgy to find an advertisement for facebook when you’re googling your name. If the initial reaction of the German blogosphere is any indication, this will at least be the first communications problem facebook faces in its still recent attempt to gain market share in Germany. Someone in this comment thread is suggesting sending facebook an invoice for the use of their name in an ad – if there’s a serious legal rationale for that, I might well do it ;).

Until then, if you’re part of the club – and a member of facebook -, why not join the facebook group protesting this strategy?

I usually don’t remember things I read in a newspaper word by word. But I still remember the beginning of an article published in the Irish Times back in 1998. It dealt with the German act in that year’s Eurovision song contest, and my Irish friend thought I should read it.

Germans have a general, if somewhat unfair, reputation for humourlessness.

Unfair indeed… we can even lough about ourselves, and even if the jokes aren’t meant to be backhanded compliments like it’s the case in Citroen’s new C5 spot, produced by EuroRCSG for the British market, and currently available on the net and in cinemas across the British Isles. By the way, when I heard the „unmistakably German“ voice over, I realised something else – the car reminded me of the Audi A4… I doubt that’s an association Citroen had in mind.

But back to the the jokes visible to everyone – here’s the youtubed version – enjoy your dose of Germanic clichés.

Sometimes it’s really amazing to watch how the google adwords service reacts to content changes on this page… Three pope related posts, and ads for Benedict related services are displayed. Impressive, but I suppose, not too helpful for most blogs, where the content of archive pages is probably as important as the index page when it comes to determining the target group.

Maybe they should not only try to see blog posts as a content unit, but also offer a possibiltiy to adjust the speed of ad-content adjustment to avoid temporary outliers like the pope-related one… These days, whereever I go, bad advertisement seems to multiply around me. Is it me, or is the quality of the common German advertisement getting worse, if at all possible? Ever wondered why you might need contacts but never dared to ask? This horrible advertisement in the Hamburg S-Bahn thinks it has the answer…

Last week, I read somewhere that google-ad clickthrough rates are to increase significantly if the ads are placed between the posts as opposed to being placed alongside.

Well, from my experience, whoever claimed this correlation was probably just lucky. Personally, I can’t really see any change in the clickthrough rates – it’s still in the 0.1 % range, although other google ad users claim to have far better rates.

So I can confidently announce that this is not a money making blog, as opposed to the ones mentioned in this cyberjournalist report. But then again, it is also true that my little proto-diary has not yet shredded the career of any prominent politician…

For the moment, the average daily „turnover“ of this blog reflects what it means to me – my very own two cents (well, Dollar cents…).